We at IBCP fully support Senator Vincent P Martin’s Protection of the Native Irish Honey Bee Bill, which seeks to ban the importation of non-native honeybees. The native Irish honeybee, known as the Irish Black or Dark Bee, is a subspecies of the European Dark Bee, or Apis Mellifera Mellifera.

The European Dark bee, once common across most of Europe, now only remains in a few areas. The decline in the sub-species is largely down to hybridisation with other, often introduced bee species. Ireland is one of the few places remaining in Europe that can boast pure Apis Mellifera Mellifera bees. This genetic gene pool is an important resource as the sub-species continues to be under threat.

Until relatively recently, it was thought that the pure native Irish Black Bee was extinct, but DNA analysis has shown that our honeybees are still 98% pure. This could mean that their genetic stock could one day repopulate parts of the European mainland. Preserving the genetic line is therefore even more important.

But, Irish honeybees are still under threat from imported bees. Non-native species may breed with our native bees, producing offspring that are less well adapted to the Irish climate. They may also develop different traits and characteristics. Irish black bees are less aggressive, less prone to swarm and are best adapted to pollinate Irish wildflowers.

Another real danger is from imported diseases, parasites and pests. The Varroa mite is a big threat to the health of bee hives. It was introduced into Ireland through importation.

A further threat is that non-native bees may start to out-compete native bees for food, aggravating the risk faced by already endangered species.

Senator Martin’s bill seeks to ban outright the importation of non-native honeybees, and it is currently going through the Seanad. It has a long way to go yet before it becomes law.

If it does pass then Ireland will join the Isle of Man and islands off Denmark and Finland as safe spaces for native bees.

We would encourage everyone who is concerned about Irish bees to ask their local TD and/or Senator to lend support to this Senator Martin’s bill. It is in no way controversial, enjoying support from 90% of Irish beekeepers and Beekeeping Associations.

While we in IBCP wholeheartedly support the ban on importation of non-native honeybees, we note that this should only be the first step. Unfortunately, honeybees are not the only non-native bee species imported into Ireland.

Bumblebees are also often brought into Ireland for commercial pollination of strawberries, apples, tomatoes and other crops. The importation of non-native bumblebee species carries the same dangers to native bees as the importation of honeybees does. However, the impact could be even worse for biodiversity. Irish honeybees are an endangered species in the wild but are doing well as a farmed species. There is no such fall-back position for bumble or solitary bees. If our native bumblebee species decline because of inter-breeding with non-native bees, or from diseases introduced by them, the effect on biodiversity could be catastrophic.

Between 1,500 and 2,000 colonies of non-native bumblebees are imported into Ireland every year, so the threat is very real. Worse, in 2013 less than a quarter of importers disposed of the non-native colonies properly, leaving a real risk of interaction with native species.

Ireland should not need to import non-native bees of any type. Yet, our native bee species are in decline and do not always pollinate commercial crops sufficiently. We are in a biodiversity crisis because of poor practices built up over the last few decades. We have the power to reverse these, to improve biodiversity, to cut down on pesticides that weaken bees, to protect, celebrate and cherish our own native bees. We have an opportunity to reverse the decline in our bee species and recreate conditions so that they will thrive. This will benefit commercial crop growers more than importing non-native species.

If we lose our bees we will never get them back. It will be an incalculable loss to us and future generations.

Please raise the issue of bee species importation with your elected official. We need these laws. More importantly, our bees need them. 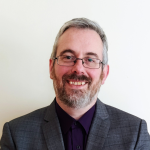 Dermot has been a volunteer with IBCP since late 2020, and manages our PR & Marketing team.

In his day job he is an IT Technical Officer for the Munster Technological University. Dermot has always had a passion for biodiversity and an interest in bees, including a couple of years keeping honeybees.

He is a husband and father to two wonderful children who also help out IBCP from time to time!